The Problems With Knob and Tube Wiring 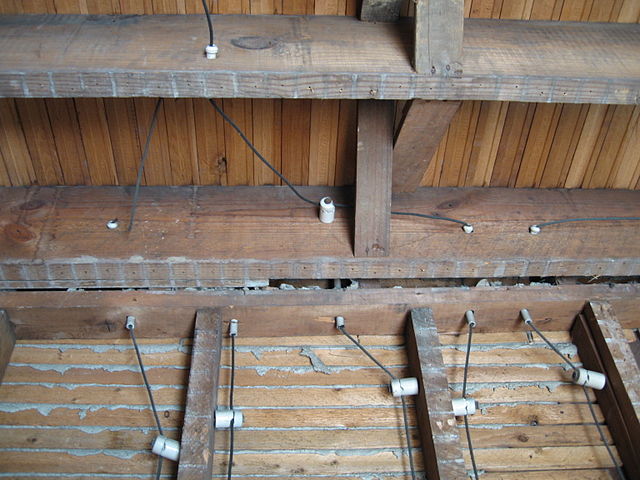 Old houses are so beautiful! Wandering through the suburbs can feel really dull, almost eerie, because of how similar any two houses are; I remember going to a new friend’s house as a kid and realizing the layout of their house was almost exactly the same as mine; it’s weird knowing where the bedrooms and kitchen are in a place you’ve never been to before. Old houses, on the other hand, are all unique; they come from an era before large conglomerates built communities, and they bear the marks of the hands that built them. A lot of these pre-suburban houses were built before the 1930s; this was the era before really advanced plastics, so wiring was different.

Knob and tube wiring was the standard of the day; wires were insulated using cloth and rubber, the more widely available materials at the time. It used it’s eponymous porcelain knobs in order to hold wires in place and change their direction, while porcelain tubes were used to insulate wires running through wooden studs. As time went on, this system was largely replaced. Thick insulating plastics became cheaply available, especially after World War II, and entirely new systems of wiring became available.

You may have heard terrible things about knob and tube wiring; these worries have been chiefly inflated by the insurance industry, which is very knob and tube adverse. In fact, knob and tube are so toxic to insurance companies that many of them will simply refuse to take the risk. One might suppose that this is because of some inherent problem with knob and tube wiring, missing safety features that are now standard in electrical systems. While this is partially true, there are a couple of other reasons insurers shy away from this old wiring system.

The primary reason insurers avoid knob and tube is because, well, it’s old! Really, really old; most knob and tube wiring you’ll see is approaching a century of use. It can be hard to figure out which wire is neutral and which is hot, simply because both wires are blackened from dust and dirt accumulated over generations of use. The systems are also rarely well maintained, because most electricians who see knob and tube strongly recommend you just replace it. Old knob and tube systems might have cracked porcelain and worn rubber.

Knob and tube wiring also came into use before using a grounding wire was commonplace. When your home has outlets with only two-prongs, it’s a sign that knob and tube might be in use. Grounding wires are an important safety feature that help protect your home when shorts occur.

The old wiring system also presents problems for modern day insulation, most of which is flammable. Knob and tube dissipate heat through the air, and when it’s close to modern insulation, this heat can be enough to start a house fire.

When you have knob and tube in your home, it’s probably safest to replace it; it may also be cheapest to replace it in the long run, as the higher insurance premiums can cost a pretty penny over the years. Top-notch Winnipeg electrical contractors will be able to replace your old system with minimal disruption to your daily living; call for a consultation!